A framework for the analysis of multidimensional inequality: a tool to combine evidence and political decision 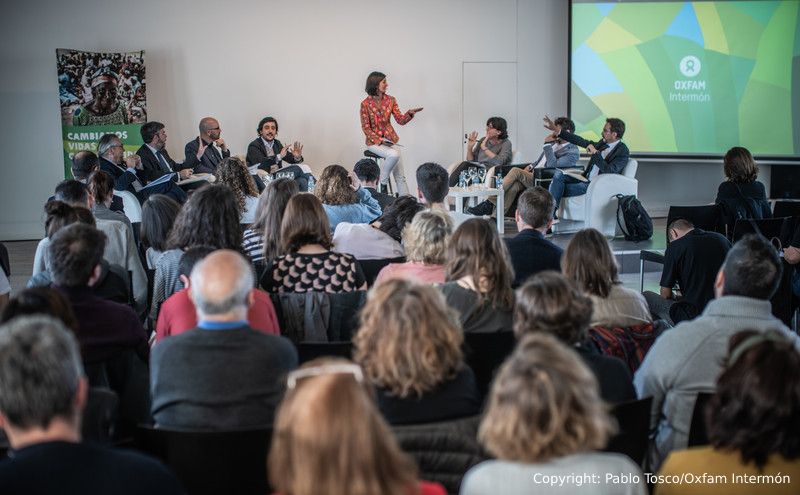 Politicians, academics and practitioners discussing on inequalities, Spain 2019
The Multidimensional Inequality Framework (MIF) has been the perfect excuse to bring together experts from academia and politicians in Spain to think and discuss about inequality. Based on this tool and under the leadership of Oxfam, these people have worked jointly to measure and assess different dimensions of inequality in our country.

Different experts in education, health, quality of democracy, economic inequality and housing (the so-called "domains of life" by the MIF), have used this framework as a starting point to measure some of the indicators proposed. From there, they have expanded the measurement and analysis of each domain using their own knowledge, selecting and taking into account those indicators that were considered most relevant to the Spanish context, ensuring that this framework is flexible and adaptable to the context to which it is applied. Once the measurement was done, the experts proposed the possible drivers and solutions to the inequalities experienced by people and identified by domain.

But the most relevant aspect of this process has been the joint discussions among the experts and between them and Oxfam. The discussions have allowed us to share ideas, debate on the causes of the multiple, existing inequalities (and reach some agreement on them), and discuss what the possible solutions are, which varied more depending on the background, position or ideology under discussion.

The process around the Multidimensional Inequality Framework has also allowed us to innovate our ways of influencing. By including high level political representatives from the four main Spanish national parties in the discussions, in such a way that they are no longer being persuaded about the proposals of a given civil society organisation like Oxfam, but try to create joint political consensus around inequality reduction and the proposals for change that the framework suggests.

The main results of this initiative relate to the efforts and work done with some politicians and decision-makers involved, who are very influential within their parties. This work has been a success. We have made inequality an issue more present than ever in the public agenda, and its reduction has built consensus among the main political parties, such as the Spanish Socialist Workers’ party (PSOE), the winner of the recent general elections on April 2019, or Unidas Podemos.

Besides, we have been able to create a group of expert advisers who continue supporting Oxfam in the development of proposals regarding inequality. Besides, many of these experts became members of the renewed Government and other political institutions during the last year, which may have meant that the challenge of inequality reduction counts on decision-makers convinced that we need make change happen to achieve a more equal and fairer society.

The team engaged in this process has had a truly enriching experience. It has been a privilege to discuss about the need of a more equal society jointly with experts from civil society (Oxfam), from the academy and with political decision-makers, generating great opportunities for learning and for taking action. Therefore, this process marks a before and an after in the relations with these key actors because, to a greater or lesser extent, the phenomenon of inequality has been better positioned in the minds and agendas of all those involved.